The following timeline was put together by the Masorti Movement in Israel:

Since 1980, Egalitarian Masorti/Conservative minyanim have gathered and davenned without interruption in the upper Kotel plaza (on the edge of the public area) several times each year, primarily Tishah B’Av and Shavuot.

Members of the Masorti/Conservative minyan, davening in the upper-Kotel plaza, were attacked by Haredim who threw bottles, diapers, and excrement. Participants in the minyan experienced both physical and verbal violence. The police escorted/pushed minyan group outside the Walls of the Old City.

The police had promised to protect the daveners of the Masorti/Conservative minyan in the upper-Kotel plaza, but, bowing to the demand of a representative of the Ministry of Religions, declared mixed prayer (men and women praying together) to be in violation of Israeli law and ordered the worshipers to leave the plaza. The ma’ariv prayers continued as the police surrounded and pushed the group toward the Dung Gate. Several worshippers were injured. The davening continued outside the Dung Gate. 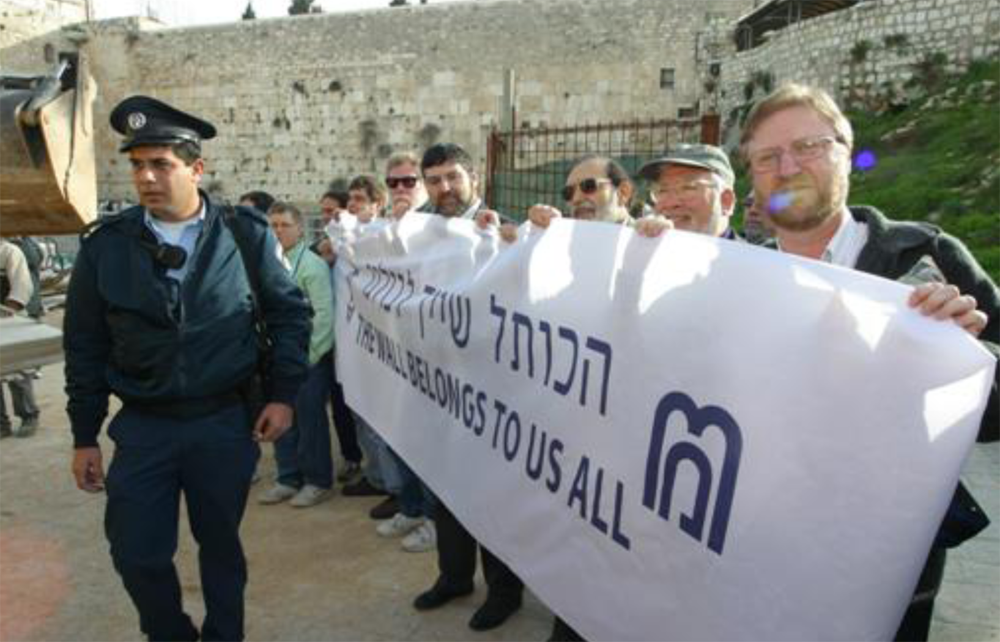 Masorti/Conservative worshipers who had gathered early in the morning were attacked by Haredim who cursed them and hurled rocks at them. The police again pushed the daveners “for their own safety,” out through the Dung Gate.

The first agreement between the Government and the Masorti/Conservative Movement regarding davening at Robinson’s Arch was signed: once each week, up to 100 worshippers, could come to daven.

With the responsibility and readiness to reach a compromise and to dialogue, and to limit friction and confrontation which could, heaven forbid, escalate to bloodshed, we have decided to accept the proposal, for a 12 month trial period, to hold prayers at the southern end of the Kotel, rather than in the main plaza. This is a great day in the struggle for religious pluralism in Israel, a day in which the government accepted the principle whereby every Jew has the right to pray at a site holy to the People of Israel, in keeping with his/her custom.

The Robinson’s Arch agreement was expanded adding a second day each week for prayers.

The Robinson’s Arch agreement was expanded and extended for three additional years: daily minyanim and, with prior coordination, Erev Shabbat, holidays, and other special occasions. Over the course of the year, 46 minyanim prayed at the site – some 1,000 worshippers in all.

The start of negotiations with the government to expand the Robinson’s Arch agreement: the area for prayer, the hours for prayer, provision for ritual needs, and staffing.

A plan to expand the area for prayer at Robinson’s Arch was presented by the Israeli government with the imprimatur of the Municipal Planning Committee and the Commission for the Development of East Jerusalem.

2013 | Temporary Platform Constructed
Naftali Bennett, Minister of Religions and Minister for Jerusalem and Diaspora Affairs, erected a temporary prayer platform which is open to all 24/7.

2013-2016 | Negotiations for a Permanent Space
Intensive negotiations under the auspices of Cabinet Secretary Avichai Mandelblit, with the involvement of the Jewish Agency and JFNA, aimed at achieving an agreement acceptable to the Masorti Movement, the Reform Movement, Women of the Wall, the Rabbi of the Kotel and the Ministers of Religion and Justice.