Shall the State of Israel Recognize the Abayudaya Jews of Uganda? A Summary of the Hearing before Israel’s High Court of Justice

(see: Background Information on the Israeli Supreme Court Case Regarding the Jewish Community in Uganda | The Rabbinical Assembly for additional context)

Click here to read the below summary in Hebrew.

The long awaited Supreme Court hearing concerning the recognition of the Abayudaya Jewish community of Uganda took place this week. Yosef Kibita, a young man from Uganda who had halachically converted to Judaism in 2008, applied to make Aliyah. His request had been denied by Israel’s Interior Ministry, we finally learned, on the grounds that Yoesf’s conversion, although authorized by a Beit Din of Masorti rabbis, did not take place in a “recognized” Jewish community.

Exactly why the Interior Ministry rejected Yosef’s Aliyah application had been unclear. It became clear only after the State presented its case to the court. The State claimed that in order for conversions to be recognized by the State for purposes of Aliyah, under the Law of Return, they must be recognized by one of the major denominations and have taken place in a recognized Jewish community. As there were no Jews in 2002, until the conversions took place, by definition, they did not take place in a Jewish community. Judge Manny Mazuz was careful to point out that the court was not suggesting that Yosef had undergone an invalid conversion. In addition, he pointed out that there was no reason to believe that Yosef had undergone conversion in a cynical effort to obtain a “Green Card” to Israel. This last point is quite important as the criteria for Aliyah by converts were established to prevent a transactional situation whereby a person converts to Judaism simply to obtain the right to settle in Israel.

The court also pointed to the affiliation of the Abayudaya with Masorti Olami in 2009. The government claimed that at the time of Yosef’s conversion, in 2008, the community was not yet “recognized” by the Masorti/Conservative movement, as required by the criteria of the Interior Ministry. Mazuz noted that it was clear that they had been adopted by the movement beginning in 2002 but official affiliation began only in 2009.

Thus Yosef, our lawyer (Nicole Maor), and the Masorti supporters faced a decision. If it was decided to ignore the issues raised by Mazuz and ask the court to rule – there was a strong chance that Yosef would be denied Aliyah on the basis of his conversion having taken place prior to 2009, the year the Abayudaya officially joined Masorti Olami. He would then be required to leave the country and return to Uganda.

Other option were presented by the court.

Option one: Yosef could return to Uganda and, as it were, re-convert. Then his case could come before the court again. But this time he would have a conversion certificate dated after 2009. That is not to say that his Aliyah application would be approved. Quite the opposite. The position of the State is that ALL conversions in the community (in all of the so-called “emerging communities), irrespective of when they took place, were unacceptable. But, Mazuz stated, there would be reasonable grounds for a new case based on the premise that the conversion has taken place in a community that was now affiliated with the Masorti/Conservative movement. This new case could take years to resolve. However, it would allow the court to consider recognition of the Abayudaya members where the conversions took place after 2009.

Option two: Yosef could leave Israel and appear before a Masorti/Conservative Beit Din in a recognized Masorti community abroad. He would then be able to, after nine months, again apply for Aliyah. This would, in all likelihood, resolve the issue of status for Yosef. It would, however, leave the issue of recognition of the Abayudaya, by the State of Israel, unresolved.

Mazuz pointed out that it was clear that the State was not thrilled with accepting such emerging communities. Yet, he pointed out, sooner or later the issue would need to be resolved.

The next steps will be to see to it that Yosef undergoes a new “conversion” and applies again for citizenship. In addition, we expect to bring a new case before the court of a community member who had converted after 2009.

We are aware that many will ask what can be done to help. The best answer I can give is to be patient (as difficult as this may be) and allow the process to move forward. Stay informed. Contributions to cover legal costs would be much appreciated. So too, contributions to help with needs of the Abayudaya community (food, medical, educational). This can be done through the Masorti Foundation.

Should the matter proceed in unexpected directions all of the parties involved, along with the leadership of the Masorti/Conservative movement (and Reform as well as the issue of emerging communities affects Reform communities too), will consider the options available and develop specific ideas for supporters to pursue.

I am attaching the court document from today’s hearing so that those who are Hebrew readers may read the words of the court. 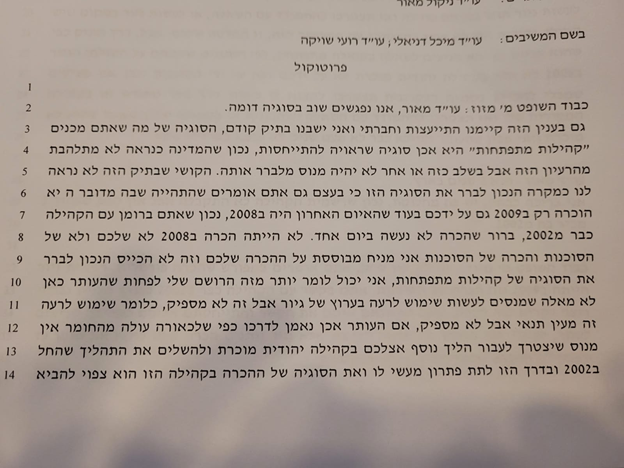