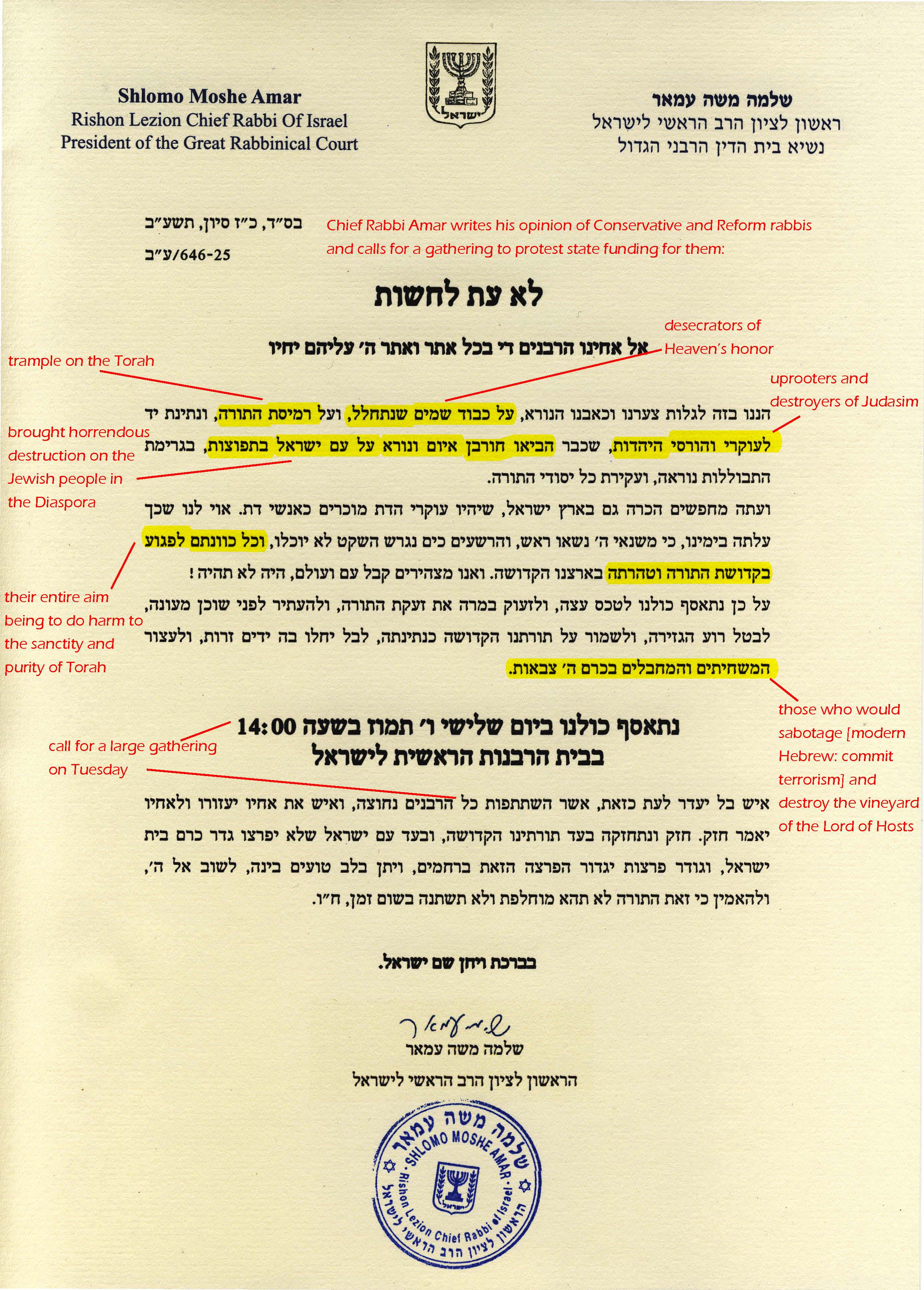 The Rabbinical Assembly is outraged by a letter issued on official Israeli government stationery by Chief Sephardic Rabbi of Israel Shlomo Amar, calling for a rally at his office this coming Tuesday. The language used in the statement is inflammatory and inciting, referring to our members as “terrorists” whose “sole intention is to do harm to the holiness of Torah.”  This letter, issued under his official stamp, is in protest of the order by Israeli Attorney General Yehuda Weinstein to fund a limited number of non-Orthodox rabbis.

The State of Israel and the Jewish people have learned the most bitter lesson in the murder of our beloved Prime Minister Yitzchak Rabin (z”l) that incendiary language can result in devastating consequences.  In support of our Masorti rabbis in Israel, we speak as a worldwide Conservative community in demanding that this threat to their physical safety, not only their personal integrity, be defended in the strongest possible way. The Talmud (Arakhin 15b) teaches that hateful speech has the potential to kill. Rabbi Amar’s language places all Jewish people at risk of violence, all because the Attorney General on behalf of the government of the State of Israel directed that non-Orthodox rabbis in agricultural communities could be paid salaries from non-religious budgets.

In the bitterness of ironies, Amar’s rally will take place at the same timeframe as the annual meetings of the Jewish Agency for Israel, including its “Unity of the Jewish People” Commission, a body sincerely devoted to building worldwide community. We call upon those in attendance at the Jewish Agency meetings to utilize the important opportunity of being together to call for lawful, restrained and appropriate behavior on the part of Israeli officials. Most importantly, on behalf of the vast majority of the world’s Jews who do not conform to the unfathomably hateful language of one of the two chief religious leaders funded by the Government of Israel, we ask that the resources of the Jewish state be devoted to teaching and propagating a love of Judaism and the Jewish people. As the Talmud concludes (Arakhin 15b), “What is the remedy for slanderers? If he be a scholar, let him engage in the Torah, as it is said: The healing for the tongue is the tree of life.”

Some specialists argue that loan "goodfinance-blog.com" help people to live the way they want, because they can feel free to buy needed things. Moreover, some banks give term loan for different classes of people.