From Sim Shalom to Lev Shalem

Nearly 40 years after Robert Gordis wrote about the Silverman siddur in Conservative Judaism, Jules Harlow – the editor of Siddur Sim Shalom – weighed in on the subject of continuity and change, the forces shaping any authentic Jewish prayerbook. In the Summer 1984 issue of Conservative Judaism he places the soon to be published Sim Shalom in the direct line of tradition extending from Amram Gaon of 9th century Babylonia and Saadia Gaon of 10th century Egypt to the 1927 Festival Prayer Book by the United Synagogue and on to the 1945 Sabbath and Festival Prayerbook -- a.k.a. “Silverman” prayerbook -- calling it “an heir to the wealth of classic Jewish prayerbook traditions.”

Harlow’s piece provides a cautionary tale for those who would argue for a siddur mi-Sinai (from Sinai) as he enumerates some of the changes in each of the Conservative movement’s siddurim which are actually drawn from the tradition. With no trace of irony he notes that the 1927 Festival Prayer Book “made explicit the traditional Jewish concern for universal peace by adding the Hebrew word ba-olam (in the world) to the daily prayer for peace, thereby following “a modification found in the prayerbook of Rav Saadiah Gaon.” So much for radical change! Another “innovation” in that 1927 siddur was modifying three of the early morning b'rakhot (blessings) which offer praise to God for having created each individual in the divine image, a free person and a Jew, rather than the traditional versions which express gratitude for not having been created a woman, slave or non-Jew. This certainly qualifies as innovative for 1927. 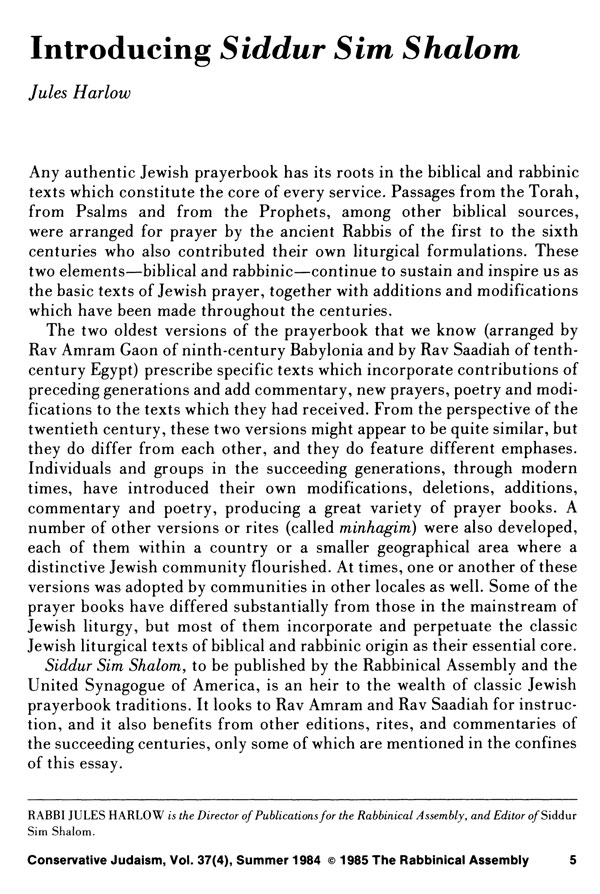 Moving on to the 1961 Rabbinical Assembly Weekday Prayer Book under the chairmanship of Gershon Hadas, we encounter a real imperative for change in the liturgy – the establishment of the State of Israel in the land of Israel. In addition to appropriate responsive readings in a supplementary section of the siddur, Harlow cites the many changes that constitute a “liturgical reaction” to this “happy reality:” a third al ha-nissim prayer along with a Torah and Haftarah reading for Yom Ha-atzma'ut (the same passages, he points out, as those found in the special prayer book for the celebration of Israeli independence published by the religious kibbutz movement in Israel). The dramatic changes in the Weekday Prayer Book resulting from the independence of the Jewish state are juxtaposed to a more modest but no less timely change in language, referring to God as 'You' rather than 'Thou.' Siddur Sim Shalom also avoids words like “didst, shouldst and wouldst,” language not connected to our daily experience that can have the effect of removing prayer “from the context of the realities of our lives.” This same sensibility also explains the translation of atah in blessings as 'You' rather than the more distancing 'Thou' since the purpose of prayer is to “help bring us closer to God.”

The litany of changes in each of the publications of the Conservative movement continues with those both dramatic and modest; changes motivated always by the three principles cited by Robert Gordis in the 1945 CJ article – “continuity with tradition, relevance to the modern age and intellectual integrity.” Changes in the 1972 Mahzor for Rosh Hashanah and Yom Kippur (editor, Jules Harlow) addressed the issue of gaining ritual atonement for sin in a world without the Temple. Harlow chose, for instance, to present the re-enactment of the service of the Kohen Gadol using an abridged adaptation of Mishnah Yoma in a “straightforward manner” while the medieval liturgical poem traditionally used for that purpose was found to lack clarity and because in the medieval text “the poetry delivers its emotional force in a way which is not typical of modern writing: it multiplies modifiers – adjectives and adverbs. Modern writing -- in Hebrew, as well as in English, features the directness of verbs and nouns, a style similar to that found in rabbinic literature.”

Parallel to this sensitivity to language is a reflection of the community’s growing sensitivity towards gay and lesbian Jews in the form of an alternative Torah reading for minhah on Yom Kippur. This alternative to the traditional reading of the forbidden relationships of Leviticus 18 is a harbinger of changes to come in the Conservative movement’s attitude towards gay and lesbian Jews. Another option offered in this mahzor is the text for the blessing of the congregation by its kohanim, a traditional option in the spirit of the contemporary culture that values options.

This spirit -- of which there are numerous examples -- is a motivating force behind Siddur Sim Shalom which Rabbi Harlow also discusses in this article. To some extent this is a reflection of the inherent diversity of the Conservative movement which results in the frequent superscription “Some congregations add…” And once again we see the commitment to authenticity alongside the valuing of the contemporary. Following the conclusion of the silent Amidah, there are alternative texts provided for an individual’s prayer. Asserting that at certain points in the service -- for the most part in the communal first person plural -- when the individual voice should be emphasized Harlow cites the traditional practice of reciting the passage beginning “My God, keep my tongue from evil, my lips from speaking lies” which is, on the one hand, adapted from the words of Mar bar Ravina of 4th century Babylonia but is seen here to support a very contemporary notion that “At this point in the service anyone’s words are as authentic, appropriate and halakhic as the words of any sage or ancient rabbi.” A strong affirmation of the importance of the individual that rests on the words of a 4th century poet!

Modern sensibilities – not to mention the two millennia which separate us from Temple sacrifice as a form of worship and, particularly, of atonement for sin – account for the omission of many references to the ritual of animal sacrifice and, instead, inclusion of rabbinic texts which teach that deeds of lovingkindness must now atone for sin. And another option is provided for the middle b'rakhah (blessing) for the Amidah of Shabbat Musaf, an option that omits reference to animal sacrifice. A very different response to modern life is the inclusion of responsive readings in English to “enable people who otherwise would not be able to participate meaningfully in a service to do so,” although on the side of tradition there is an acknowledgement that “everyone should be encouraged and helped to learn enough Hebrew to be able to pray in the original…” And the egalitarian concerns that will be raised in Conservative circles for decades arise here around the Torah Service since Siddur Sim Shalom “reflects the reality that in many congregations both men and women participate in this service.” A particularly interesting example is the emendation of the prayer on behalf of the congregation recited after the Torah reading on Shabbat -- “Thus the prayer that God bless ‘the members of this congregation, them, their wives…’ -- deletes these last two words.”

The enormity of the Holocaust in the modern Jewish experience which was not fully realized at the time of the 1946 Silverman siddur explains the addition of excerpts from diaries and recollections of victims and survivors which can be added to the weekday service on Yom Ha-sho'ah. And then we return to “suggestions made by authorities of past generations:” in this case an innovation of 16th century Rabbi Isaac Luria -- a declaration added to the early morning service that “one is prepared to take upon oneself the mitzvah presented by God in the Torah to ‘love our neighbor as yourself.’ ” Rav Saadiah’s prayerbook also makes a contribution to the innovative Sim Shalom when it articulates “an explicit concern for peace throughout the world” because the opening words of the final berkhah of the Amidah are “sim shalom” (an interesting reflection of the cosmopolitan times in which he lived and the central role of Babylonia in governing the great expanse of the Muslim caliphate). So Siddur Sim Shalom in that same spirit “introduces a similar feature into the text of the Amidah for afternoon and evening services in the parallel b'rakhah whose initial words are shalom rav.

Perhaps it is the rapid pace of change in contemporary life that accounts for the creation of a new Conservative siddur only 30 years after Sim Shalom (Siddur Lev Shalem is expected in 2015). But along with the rapid pace of change we must credit the creativity of a movement that produced the extraordinary Mahzor Lev Shalem just four years ago. We can expect that the same set of principles -- intellectual integrity, authenticity and relevance to the time -- that guided those who created the earlier Conservative movement prayerbooks continue to be the source of inspiration for those who are working to create this new prayerbook.

I loved Mahzor Lev Shalem, and I look forward to the siddur.

I have appreciated the increasing egalitarianism in each new siddur -- particularly the emendation of "the members of this congregation, them, their wives...."  Hard to believe that even when the old Silverman was published, that didn't look odd to anyone.

So I have been surprised and disappointed that our prayers listing the matriarchs continue to list Rachel before Leah.  I get it that that is the traditional order in the few traditional prayers that include matriarchs.  But why continue to do it, at least in our new alternative formulations?  We added the matriarchs and a few other words; is there some reason that reversing their order would be harder than that?  I keep trying to find out if there is any other basis for the traditional reversing the natural order to give Rachel primacy other than that Jacob preferred her, but that seems to be it.  In our day, surely we are no longer okay with saying women's value is determined by what some guy prefers.  I am uncomfortable continuing that disrespect -- she is our matriarch as much as he is our patriarch, after all -- in our prayers.

I realize that the next step in this logic is to ask why Bilhah and Zilpah are not treated as matriarchs at all (some people do, I believe).  That's an even more extreme example of the same problem.  The traditional explanations are embarrassing -- that Leah and Rachel were more "spiritually lofty" and such.  What is ours?

Was there ever any discussion of any of this?  I would really like to hear about it; there may well be good reasons that haven't occured to me or to those I have asked.