From Silverman to Lev Shalem: The Evolution of the Conservative Siddur

The October 1945 issue of Conservative Judaism featured an article by Rabbi Robert Gordis -- “A Jewish Prayer Book for the Modern Age” -- based on the paper he presented at the 45th Annual Convention of the Rabbinical Assembly the previous June. In his introduction Gordis quotes what he calls Solomon Schechter’s “acute historical observation:”

“…at a time when all Jews prayed, one prayer book sufficed their needs. Now when far less Jews pray, more and more prayer books are required…”

Gordis then continues with his own quintessentially Conservative Judaism observation: “The prayer book became a problem for Jews when Judaism as a whole became a problem. Hence the issue involved can be understood only in terms of this larger framework of Jewish life.” 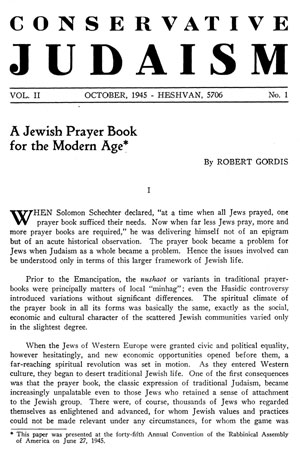 It may seem ironic to claim that Emancipation made Judaism a “problem” but from the perspective of traditional Jewish life that was the reality. Gordis notes that while historically the “great divide” of variations in siddurim had been “principally matters of local nusha'ot or minhag,” the siddur became one of the most important post Emancipation dividing lines between traditional and anti-traditional elements in the Jewish world. This divide was most apparent as the founders of the Reform movement in Germany began to “modernize” the siddur, focusing on three major areas: reducing the length of the service; reducing the use of Hebrew in favor of increasing the vernacular; and various changes in content on “dogmatic grounds” such as resurrection, personal Messiah, the Chosen People concept, references to sacrifices and the return to Zion. (In his nuanced analysis of the Reform movement’s liturgical changes Gordis notes that the “device of varying the text of the prayers” resulted in five different services for the “Sabbaths of the month” and five additional services for special Sabbaths in the American Union Prayer Book and an astonishing thirty distinct services in the English Reform Prayer Book!)

In the early Conservative Movement the “right wing” retained the traditional prayer book unchanged while “left wing” prayer books showed an affinity for the liturgical changes in the Reform movement in the interest of “making traditional Judaism vital and creative in the modern world…” The Jastrow Prayer-Book, for instance, edited by Marcus Jastrow and Benjamin Szold, eliminated all references to the restoration of Zion and drastically reduced Pesuke d’Zimrah. But, as Gordis notes, these “left wing” prayer books were largely issued on “individual responsibility.” The only “collective enterprise” of the movement was the 1927 United Synagogue Mahzor of the Pilgrimage Festivals until the RA and United Synagogue agreed in 1944 to adopt Morris Silverman’s manuscript as the basis of a joint prayer book and established a commission to “revise, supplement and edit the material.”

The rest -- as they say -- is history; a 70 year history of adaptation and change that began with Silverman and brings us to the current work of the RA siddur committee chaired by Ed Feld. Gordis presents an excellent analysis of the Silverman siddur in support of his assertion that its central principles -- continuity with tradition; relevance to the needs and ideas of its generation; and intellectual integrity -- “constitute the basis of a Jewish prayer book in the modern age,” and deeply reflective of Conservative Movement values. The current siddur committee has applied these same principles in its work and as we look forward to the publication of the “preliminary edition” of Siddur Lev Shalem for Kabbalat Shabbat and Ma'ariv this Fall and the complete Siddur in 2015 it will be illuminating to study the record of the past 70 years and, indeed, the 2000+ years of the Jewish liturgical record.

Since the publication of the Silverman prayer book each new siddur, mahzor and other liturgical texts have been the subject of an article in Conservative Judaism. These articles by distinguished colleagues and academics constitute a record of our movement’s commitment to creating what Gordis called “a synthesis of the old and the new, the traditional and the contemporary” because -- as he observed in 1945 -- “nothing less is the historical mission of our movement.”

We will be posting other articles about liturgy from Conservative Judaism as well as reflections from members of the siddur committee, contributions from colleagues and academics, pages from the siddur itself and other material to set the stage for the launch of this extraordinary new prayer book, a true milestone in the history of the Conservative Movement.

I would like to know whether a vocal sh'va is indicated in the text with a specific sign or point. Specifically, is a letter with sh'va following a historical long vowel considered vocal? Is a sh'va under a letter with dagesh forte marked as vocal. What about a sh'va following a short vowel which in complete masoretic form also has a metheg? Finally, how is a kamatz katan (kametz khatuf) printed?