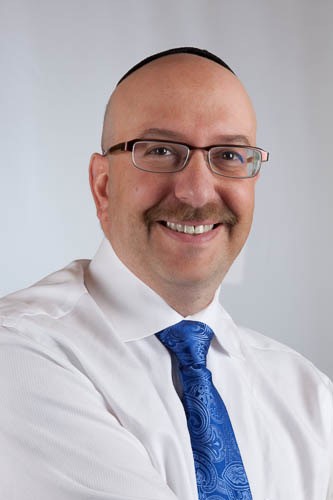 As part of our ongoing efforts to highlight the wonderful diversity of the Conservative/Masorti rabbinate, we spoke with our colleague David Krishef, who has been working at a small synagogue in Grand Rapids, Michigan for over two decades. Below, he shared how he led his congregation through a major transition process, how his interest in biomedical ethics has helped him connect to families with medical issues, and his work as a weekly columnist.

You’ve been working as a rabbi for over two decades at a synagogue in Grand Rapids. How has the community changed and evolved in your time there?

When I arrived in Grand Rapids almost 25 years ago, the majority of the congregation were native to the city. I arrived in the midst of a transition — ten years earlier, virtually the entire congregation would have been native Grand Rapidians. Today, the vast majority did not grow up at Ahavas Israel, in Grand Rapids, or in the Jewish community. The synagogue used to have a reputation for being a closed community, somewhat unfriendly to outsiders. Because we are now a community of “outsiders,” I don’t hear that criticism nearly as often. However, through the transition, we have maintained a family feel within the congregation. It has as much to do with size as it does with the mix between natives and transplants, but our roots as a collection of Grand Rapids families has contributed to our ability to maintain a close-knit family feel to the congregation.

Another change in the congregation has depended on our having become a group of people who truly welcome outsiders. The synagogue has gotten smaller in the past 25 years. Ahavas Israel is not immune to diminishing numbers within the Conservative movement. But we are holding our own thanks to the conversion program that I have developed. West Michigan is a religious community. From my first year here, I have been approached by a steady stream of people interested in exploring Judaism. Some grew up in Christian churches but felt that they never belonged, left as young adults, and found in Judaism a spiritual path that resonated with them. Others came from churches which took the Hebrew Bible seriously, but at a certain point, realized that the Hebrew Bible never identified Jesus as the messiah. At that point, they left the church and approached the synagogue, as people dedicated to the Hebrew Bible, looking for community. Our Shabbat morning community is about 1/3 Jews by Choice, and they have become an important part of the leadership of the synagogue.

Before my arrival, over the approximately 100-year history of the congregation, the average rabbinic tenure was 3 1/2 years. The longest serving rabbi was 8 years (which happened twice - in 1922, and by my immediate predecessor). The expectation that the rabbi will not stay long has consequences. For example, early on I was told that rabbis did not do any fundraising at all; the congregation did not want the rabbi to have any involvement whatsoever in anything financial. As time went on, they discovered that the rabbi’s input was sometimes useful, and I could even be an effective fundraiser. We have gone from an endowment of less than $50,000 to one that soon will be more than $2 million. I can’t take credit for all of it. The gifts may have come in without my asking. But the fact is that until I suggested that we begin an endowment campaign focusing on asking our seniors for bequests, and until I went and began asking for endowment gifts, no one had ever systematically asked for that kind of gift. Fundraising is about relationships, and the congregation’s understanding of the role of the rabbi has evolved as my tenure has enabled me to develop deep ties to each of our members.

I believe that Ahavas Israel is a healthier and more stable community, having experienced consistent rabbinic leadership for a quarter-century.

Can you tell us more about your interest in biomedical ethics and how that is connected to your work as a rabbi?

My interest in biomedical ethics is an extension of my interest in all things technical and scientific. I started my college career in computer science. Although I left it for Hebrew and Jewish Studies, I never left my geek-nerd side behind. I have always been interested in the cutting-edge law committee decisions having to do with food science, Shabbat and technology, and medical issues. When the hospital contacted me to offer me a seat on the ethics committee as a community representative, I jumped at the chance. It has given me the opportunity to see the hospital and its staff from the inside. I have a better understanding of how medical decisions are made and how important good communication with doctors, nurses, and other support staff is. That has helped me when working with families dealing with serious medical issues, including end of life questions.

What is the best part of working at a small synagogue?

It is not just that the opportunities to connect with the members of one’s congregation are more intense in a small congregation; the size of the congregation facilitates those intense relationships. There is not a child who celebrates b’nai mitzvah who has not taken a weekly class with me. By the time they graduate from high school, assuming they continue their Jewish education, they have taken at least two classes with me. These religious school classes typically contain fewer than ten students, so no student is ever an anonymous face.

I have in-depth face-to-face conversations at least monthly with about 1/3 of the households of my congregation after services on Shabbat or at weekday minyan, or in study groups or programs. I am able to greet and exchange a few words with virtually every person in the synagogue on Shabbat morning. Rare are the people who I miss completely (typically because they leave early).

This is the best part of working at a small congregation.

What advice do you have for rabbis planning to make a career at a small synagogue?

A small synagogue is not necessarily a kol-bo, but the rabbi is more likely to be called on to do a wider variety of rabbinic and non-rabbinic tasks. Here’s a sample of what I did in the past two weeks that might be considered “non-rabbinic:” set up rooms, event publicity and organization, supervise web site, library, and kitchen, and collecting information for the newsletter. And of course, I also did my usual rabbinic work, such as teaching adults, children, leading every possible service (so brush up on chanting all of the megillot), kosher supervision outside the synagogue, and the usual assortment of pastoral care situations.

You run a blog called EmbodiedTorah.com and write a popular weekly column. How do you balance your other work with writing?

It is impossible to be an effective rabbi today without engaging with social media. Having an effective rabbinic presence in a community begins with reaching people through your teaching. Some people will not be in shul every week to hear your teaching (surprise!). I don’t fully write my divre Torah so I can’t publish them - but I either publish all of my formal writing on my blog or send it to the congregation in our weekly email. In addition to bulletin articles, I have done reflections on Psalms and the occasional random reflection on some Jewish issue.

The “Ethics and Religion Talk” column that I write for the Grand Rapids Press (published online at therapidian.org) is not part of my synagogue work. Ultimately, I think it benefits the synagogue to have my voice out there engaging in public dialogue, but I work on the column in the evening or on my day off.

In what ways has the Rabbinical Assembly helped you in your career?

The most important way the RA has helped me is to support the Conference for Rabbis of Small Congregations that Rabbis Ben Kramer, Michael Friedland, and I created in 2011. We put together a conference entirely focused on the nature of serving a small congregation. We held our first conference at Beth Hillel Congregation B’nai Emunah in the Chicago suburb of Wilmette. We had expected colleagues to drive in from nearby states, and were surprised that we attracted rabbis from Florida, Texas, Oklahoma, New York, and Pennsylvania as well. Clearly, we had identified a need. The RA recognized that we who were serving small congregations were the experts at identifying what we needed, and they offered their support and resources, while letting us plan the conference. For this, I want to thank Elliot Schoenberg in particular. His participation, advice, and assistance have helped immeasurably. Since then, Michael and I have organized four more conferences (including one in partnership with the USCJ) and look forward to our next one. Please contact me if you are interested and I’ll give you more information.

The RA is looking to highlight the diversity of the rabbinate by featuring RA members across a variety of rabbinic roles in congregations, schools, organizations, and communities. To nominate a colleague, email Diana Denza, our Marketing and Communications Specialist, at ddenza@rabbinicalassembly.org. Please provide your colleague's full name along with a paragraph about why you're nominating them in the body of your email.