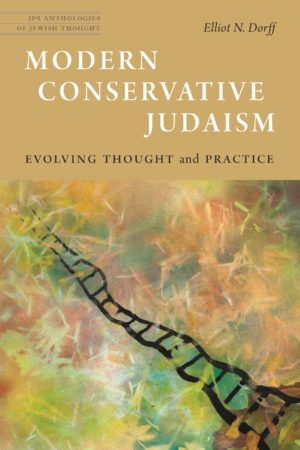 A major Conservative Movement leader of our times employs his unique position as a player in many historical events and texts to provide a personal, behind-the- scenes guide to the evolution of Conservative Jewish thought and practice over the last half century. His candid observations shed light into the sometimes unified, sometimes diverse (and occasionally contentious) thought processes behind the modern movement’s most important laws, policies, and documents—which, for the first time, are excerpted and contextualized, all in one place.

Beginning with the roots of contemporary Conservative Judaism in 1840s Germany and its evolution in America, Rabbi Elliot N. Dorff delves into Conservative thought and practice ever since, commenting upon the ongoing tension between constancy and change that is a hallmark of the Movement. In Part I: God, he explores various ways Conservative Jews think about God and the multifaceted roles of prayer. In Part II: Torah, he considers diverse study methods and approaches to Jewish law, what determines Conservative practice, how women’s roles came to change, bioethical rulings from contraception to cloning, business ethics, ritual observance (e.g., forming a minyan on the Internet, playing sports on Shabbat), and moral guidance on social issues (capital punishment, responsibilities of and towards the poor) as well as on sex and family life (non-marital sex, same-sex and transgender rulings). Part III: Israel considers who is a Jew and various stances toward and within Israel.

The worth of this unprecedented comprehensive insider’s guide to Conservative Judaism will be apparent to any student of modern Jewish history.